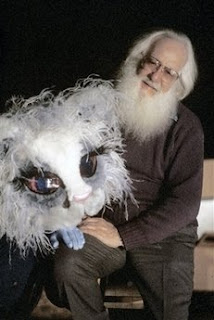 Kermit Love, the costume designer who helped puppeteer Jim Henson create Big Bird and other "Sesame Street" characters, has died. He was 91.

"Sesame Street," public television's groundbreaking effort to use TV to teach preschoolers, premiered in 1969. Henson designed the original sketches of Big Bird, and Love then built the 8-foot, 2-inch yellow-feathered costume.
It was Love's idea to add a few feathers designed to fall off, to create a more realistic feel.
"The most important thing about puppets is that they must project their imagination, and then the audience must open their eyes and imagine," he told The New York Times in 1981.
Love also helped design costumes and puppets for Mr. Snuffleupagus, Oscar the Grouch and Cookie Monster, among other characters. He even appeared on the show himself as Willy, the fantasy neighborhood's resident hot dog vendor.
But Love always insisted Henson's famous frog wasn't named for him, according to The New York Times.